Welcome to the Joe Leslie Website The Secret to Being Frank 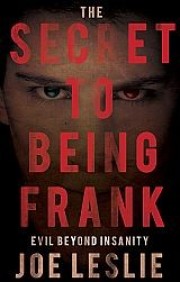 'THE SECRET TO BEING FRANK'

The novel deals with the cry of the human spirit to survive in this bizarre world of emotional conflict, fear and futility. An intense spotlight nervously falls on the protagonist, Frank Macleod, in Wales at the middle of the twentieth century. The author’s passion for Wales, which borders on adultery, tells a graphic compelling drama of Macleod’s upbringing in a hard-knocks steel town. Celtic damashealladh, ‘Second sight’, the unexplainable that still exists, form part of  everyday reality. Through social mayhem, readers see the gradual ‘Jekyll and Hyde’ change in Frank’s character. Somewhat belligerent, with an addictive steamroller personally,  he joins the Gwent Police Force. His  unorthordox approach to policing and supercillious attitude  that  rises at dawn to celebrate the glory of his reflection has serious consequences. Again, the reader is aware of  a change in his character that has total allegence to the victim. He is also willing to put his life on the line for his colleages. Frank's ability to walk on water is seriously questioned  when a serial killer surfaces and drags him under. Upon reflection, this brutally honest novel appears to be an unauthorised autobiography about the author

Genre is the clothing that every novel wears. In this book the clothing is merely a disguise,it challenges the parameter of commercial novels. Because of this the book is  different. It vividly describes the truth about a serial killer and the character of the protagonist Frank Macleod.

Essentially the novel downgrades traditional psychological profiling to a more 'cause and effect' approach. Subsequently this emphasis explores both the character and the behavioural side of the serial killers personality. It answers the paradoxical question of the 'who, why and what if' of a lethal predator. It allows the reader to look behind his mask and have some understanding of why anyone would take pleasure in the senseless act of murder. Historical forensic and policing, the challenges and even the funny side of this beautiful world instils realism into the story. The emotional truth of the novel will linger long after the reader has finished it.

My deepest gratitude and thanks to all who have read the novel.

The Secret to Being Frank